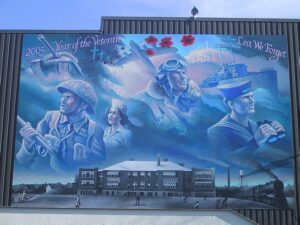 The idea for this mural came from the late Sir Paul Martin, who wanted the mural to be an educational tool so that the men and women that had given their lives for our country would not be forgotten. “2005 Year of the Veteran” tells the story of Transcona’s efforts in the World Wars on the home front and overseas in three layers. The foreground of the mural showcases the Transcona community before the onset of war with the Central School, Transcona shops, and a Harley Davidson as a nod to Sir Paul Martin. The middle of the mural is dedicated to the war effort and Transona Veteran’s participation in all branches of the military, including HMCS Transcona, Transcona Shell Co., the Cordite Plant, and Canada’s Armoured Train. At the top of the mural are acts of Remembrance including Crosses, poppies, and the words “Lest We Forget”. Located on the side of the Transcona Legion, the mural had many individual and corporate sponsors from the local and wider community.

Information provided by the Transcona Museum