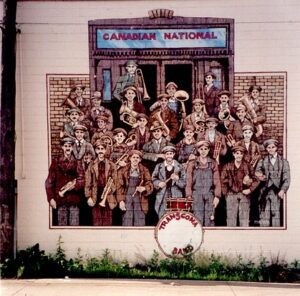 This is 3 of 4 murals painted by the artist in Transcona. The mural depicted the CN Transcona Shops Band – the band performed at various social and community events in Transcona and Winnipeg, as well as across Manitoba. This mural celebrates both the community’s connection to the railway and its music history.

Removed: 2010 – The mural was not restored due to its poor condition and the building its was painted onto – the former Transcona Curling Club – was also being demolished